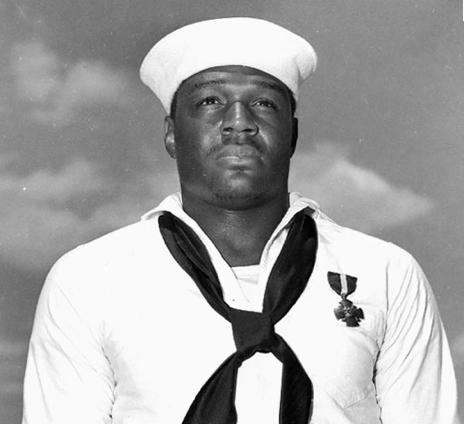 Doris (Dorie) Miller, African-American hero of World War II, was born Doris Miller in Waco, Texas, on October 12, 1919, the son of sharecroppers Connery and Henrietta Miller. Miller entered A. J. Moore High School in Waco and became the school’s star fullback. As the third of four sons in a family engaged in subsistence farming, he was forced to drop out of school. He supplemented the family income by working as a cook in a small restaurant in Waco during the Great Depression.

Less than a month before his twentieth birthday, Miller enlisted in the United States Navy at its Dallas recruiting station. Following bootcamp training in Norfolk, Virginia, he was assigned to the USS West Virginia as a messman.

On December 7, 1941, Mess Attendant Second Class Doris Miller was collecting soiled laundry just before 8:00 A.M. When the first bombs blasted his ship at anchor in Pearl Harbor, Miller went to the main deck where he assisted in moving the mortally wounded captain.

He then raced to an unattended deck gun and fired at the attacking planes until forced to abandon ship. It was Miller’s first experience firing such a weapon because black sailors serving in the segregated steward’s branch of the navy were not given the gunnery training received by white sailors. Although news stories have credited Miller with downing from two to five airplanes, these accounts have never been verified and are almost certainly apocryphal. Miller himself told Navy officials he thought he hit one of the planes. Navy officials conferred the Navy Cross upon Miller on May 27, 1942, in a ceremony at Pearl Harbor.

Following a Christmas leave in 1942, when he saw his home and family in Waco for the last time, Miller reported to duty aboard the aircraft carrier Liscome Bay (or Liscomb Bay) as a mess attendant, first class. During the battle of the Gilbert Islands, on November 24, 1943, his ship was torpedoed and sunk in the Pacific Ocean, and Miller perished. At that time, he had been promoted to cook, third class, and probably worked in the ship’s galley. In addition to conferring upon him the Navy Cross, the navy honored Doris Miller by naming a dining hall, a barracks, and a destroyer escort for him. The USS Miller is the third naval ship to be named after a black navy man.

In Waco a YMCA branch, a park, and a cemetery bear his name. In Houston, Texas, and in Philadelphia, Pennsylvania, elementary schools have been named for him, as has a Veterans of Foreign Wars chapter in Los Angeles. An auditorium on the campus of Huston-Tillotson College in Austin is dedicated to his memory. In Chicago the Doris Miller Foundation honors persons who make significant contributions to racial understanding.

“Boy’s Chance Meeting with Father of Hero” by Wilton Lanning

The Texas Collection at Baylor – Info on Doris Miller